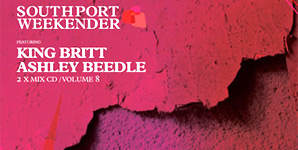 It's that great time of the year again when I receive a new Southport Weekender Volume released on SUSU showcasing a selection of tracks by a featured DJ hot from the recent Weekender. Southport Weekender is festival dedicated to cutting edge and classical soul music spanning the birth of Northern Soul to kicking Broken Beat. The Weekenders are legendary and coming from Weekender 43
we have the great Ashley Beedle and awesome King Brit.

Ashley Beedle features on CD1 fresh from the Connoisseurs Corner, one of the rooms at Southport Weekender. Anyone who's been to the event knows this
room is strictly for the heads with unheard gems and rare classics on display from Northern Soul to Disco to pivotal tracks. It's all about the collection and it's clear when
listening to CD1 Beedle is not going to disappoint. I guess you could expect such a varied and exquisite mix of tunes due to Beedle's totally versatile musical history. He starts
the CD with an amazing version of 'Walk On By' by the Dells. It certainly sets the tone for quality and he picks up the tempo with his own track 'Height' and a his own cool
remixes of 'Enjoy The Ride' by X Press 2 ft. Kissing The Pink as well as Black Ghosts 'It's Your Touch' disco edit and Peven Everett 'Surely Shorty' heavy Disco
remix. The cool Crazy P are on there, the fantastic Joey Negro, a special Ashley version of 'I Can't Turn Around' by Isaac Hayes and my personal favourite on
this mix D*Note 'The Garden Of Earthly Delights' is a true heavyweight booming soulful track. Outstanding!

Then we launch straight into CD2 featuring the legendary King Brit straight out of the Beat Bar. This room showcases all modern expressions of jazz and
contemporary soulful music. The first track Zaki Ibrahim 'Money' Brit's own remix shows total smooth sophistication and upbeat Latin rhythms that sets the
groove for the mix. Brit's own remix of Edwin Starrs' classic track 'War' is awesome and lyrically still totally relevant. CD2 heads a more deep house area where we
hear some great tunes by the likes of Glen Lewis and Martin Soveing and then the mood swings to the Latin percussion sounds influenced in house music like JellyBean Bernitez
'Latina' and DJ Oji 'Esteban'. There's an awesome King Brit remix of Ursula Rucker 'Electric Santeria' and some more deep house stuff from Solomonic Sound, a cool remix of 'Dance
Your Troubles Away' by Up Bustle And Out and emotive track by Swen Van Hees 'Tsunami'. Some great stuff.

Well I have to say it was gonna take something to beat Vol. 7 by Mr Scruff and Jazzanova but Southport Weekender have come up with another absolute bomb that truly shows
justice to the quality and spirit of the Weekender. When you've got artists like Ashley Beedle and King Brit playing their own remixes with absolute classics you really get a flavour
of how unique and special the sets are at Southport and what effort the DJ's go to here. There's no denying the sophistication and absolute calibre when listening to this. This is a
master class in music and anyone wanting to get a flavour of the Weekender won't be disappointed by this.