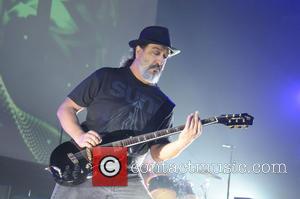 Grunge rockers Soundgarden performed their iconic album Superunknown in full for the first time at the South by Southwest (Sxsw) festival in Texas without previously rehearsing the feat.

The band played the 1994 record through in full for the first time ever during an iTunes show at the Austin music/film event on Thursday night (13Mar14), and just hours before the concert, frontman Chris Cornell admitted they had not managed to rehearse it in sequence.

He told the Associated Press, "To be honest, we haven't actually really done it yet. We're rehearsing it, but rehearsals are different. I think we did try to play it in order the other day, but then we'd stop on a song and sort of go through the different parts of it, and play it over again. So actually just going through the whole set without stopping, we've never done."

The gig also marked the band's first ever performance at Sxsw.