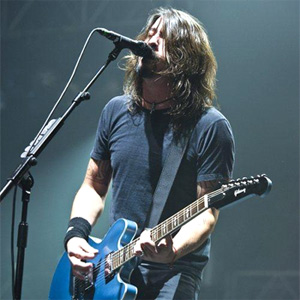 Live Review of the Sound City Players at The Forum London, February, 19th 2013

Dave Grohl marched on stage with a husky, animated 'Hey' on Tuesday night. He greeted his audience with open arms, comically noting that he couldn't believe he was back in the UK at such a small venue. But what The Forum lacked in size, it made up for with denim jacket wearing beer guzzlers who were ready for revelry, many of them sporting Foo Fighters and Them Crooked Vultures merchandise. Grohl would go on to be presenter, narrator, guitarist, drummer and finally lead vocalist in a typically versatile Sound City Players set.

Though it was a given that Grohl would remain centre stage throughout, there was an air of excitement amongst the pre-show mutterings: Who else was going to walk out on stage? The Sound City Players, a collaboration of ex-Nirvana's Grohl and members of bands such as Nine Inch Nails and Queen of the Stone Age and many other artists who had once graced the Sound City studios in LA, had appeared with Stevie Nicks only days prior to this event. The first in a coterie of rockers that Grohl introduced was Alain Johannes, or just his friend 'Al'.

A frenetic opening sequence featured songs from the Sound City Soundtrack such as Trick with No Sleeve and songs from Al's own catalogue. Grohl's hair swayed from side to side like a metronome, his gathering of buddies playing away beside him. Johannes quipped in a rare breather, 'Yeah that was a good song and this one's a good one too'. As you would expect from an assembly of successful producers and musicians, there was no lack of confidence and conviction in the ever-changing line up on stage. Yet, it seemed you were watching a group of friends in a garage session; joking, hugging and all.

Chris Goss was next at the head of the stage and introduced by Grohl as the man responsible for forging the records that 'shook your life'. His performance reached the peak of its crescendo with a cover of Master of Reality's It's Shit, with Foo Fighters' Taylor Hawkins on drums finishing with a heart tumbling solo. All the stage faced Hawkins, the Sound City emblem on either side of the stage shining down as they then began the next track, Time Slowing Down. It appeared, however, that they had rolled back the years, especially when Fear's Lee Ving walked out as the next ingredient of Grohl's alchemy.

Hardcore punk rocker Lee Ving added the most verve to the bill. His nonsensical screams, count-offs at the start of songs and piercing harmonica riffs made for a good show. Then stepped up Rick Springfield. As a vocalist, his voice cut through the band noise better than anyone else on the night. Stripping off to a sleeveless black shirt and still looking as handsome as ever, his set ended on Jesse's Girl which perhaps drew the loudest ovation from the crowd, first note to last.

There was still time for Cheap Trick's Rick Nielson to near enough end the night after two and a half hours of music. He was joined by ex-Nirvana bassist Krist Novoselic and Taylor Hawkins, who stepped down from drums and on to the microphone. Hawkins, surely the youngest on stage and only one eligible to take his top off, made his presence known and excelled with a cover of Cheap Trick's I Want You to Want Me.

The evening was special, not just because of the music, but also because of Grohl's short interludes about Sound City Studios which were a fine advert for his film. He concluded with a performance accompanied by plectrum confetti from the band which ended with calls for an encore. It was a thrilling night at The Forum, with a live collaboration of artists who accentuated the ideal that, some music is timeless - a heavenly occasion for an 80s/90s rock enthusiast.
Rob Preece