The thing that makes this Disney live-action remake so wonderful is the same thing that might put off some audience members: it's a pure fairy tale. This time, the studio has resisted the snarky, post-modern spin that threatened to turn previous live-action remakes (Alice in Wonderland and Maleficent) into pointless Lord of the Rings-style action epics. Instead, this is a genuinely beautiful, surgingly romantic, exquisitely made fantasy. 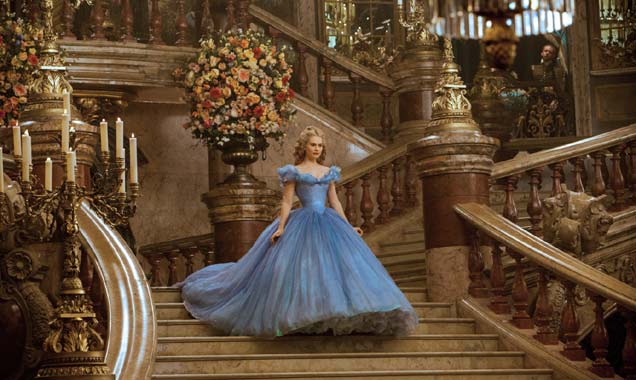 With only a few minor tweaks, this is the classic story of Ella (Lily James), whose widowed father (Ben Chaplin) marries Lady Tremaine (Cate Blanchett). She arrives with her two spoiled daughters Drizella and Anastasia (Sophie McShera and Holliday Grainger), and when she is also widowed, Ella ends up running the household just to keep things from falling apart. But Lady Tremaine and her daughters taunt her with the nickname "Cinderella" and treat her like a slave, refusing to let her attend the ball thrown by the Crown Prince (Richard Madden). He had met Ella before, and is hoping to see her at the ball, but she only gets a chance to go when her fairy godmother (Helena Bonham Carter) turns up with some magic to make that happen. And after dancing with the Prince all night, her sudden disappearance sends him on a desperate quest involving a single glass slipper.

To spice things up, screenwriter Chris Weitz has included a conspiratorial sideplot in which the increasingly wicked stepmother plots with a royal advisor (Stellan Skarsgard) to thwart the Prince's wishes. But otherwise, the film hews closely to both Charles Perrault's 1697 folktale and Disney's 1950 animated classic. This includes lavish sets and costumes that continually take the breath away, giving the characters the same silhouettes as their cartoon counterparts. And within this extravagant design work, the actors are able to create surprisingly textured characters. James' Ella isn't a simple farm girl in need of a man. Madden's Prince is looking for real love. And Blanchett's riveting Lady Tremaine is eerily sympathetic even in her darkest moments.

Cinderella is an uncommonly kind young woman, overcome with the loss of her dear father. Her kindness extends to rescuing a stag from the woods, who's being hunted by the Prince and his men. Her resolute opinions strongly affect the Prince, who's life and sense of self begins to change following their frosty first meeting. But as determined and feisty as she may be, she still finds herself unable to stand up for herself back home, where she is forced into doing the cooking and cleaning by her wicked stepmother Lady Tremaine and her daughters. That is until she is invited to a ball at the Prince's palace. With the help of her mysterious Fairy Godmother, she transforms into a Princess for the day and, lo and behold, the Prince falls heavily in love with her and will do everything he can to find her after she disappears. But, alas, there are others determined to stand in the way of their happiness.

Finally, Disney has unveiled the first full trailer for Kenneth Branagh's live action rendition of one of the world's most beloved fairytales: Cinderella. And it looks to be one of the most visually stunning fantasy flicks of the coming months.

The movie industry has been going crazy with its throwback Grimm adaptations, and it doesn't look like anyone's had enough of it yet. While many movies have opted for the spin-off, original stories - such as 'Sleeping Beauty' adaptation 'Maleficent' and 'Snow White and the Seven Dwarves' comeback 'Snow White and the Huntsman', not to mention forthcoming fairytale omnibus 'Into The Woods' - director Kenneth Branagh and screenwriters Aline Brosh McKenna and Chris Weitz have gone for the more traditional approach with 'Cinderella'.

Following her mother's death, Cinderella was faced with a lonely existence while her beloved father took frequent long trips away from home on business. The reality was much, much worse, however, when he remarries the selfish Lady Tremaine who brings with her her two hideous daughters Anastasia and Drizella. She is thus forced to cook and clean tirelessly for her step-family, who ruthlessly take advantage of her chronic generosity and unwavering kindness. Soon, she meets a handsome stranger in the woods while out on an errand, and news of a royal ball quickly reaches the family household. Thrilled at the idea of meeting some new people, Cinderella jumps at the chance to attend, but she is forced back to work by Tremaine and the girls out of sheer spite - and jealousy. The only person who can get Cinderella to the ball on time is her magical Fairy Godmother.

Everyone is familiar with the classic fairy tale of Cinderella. Cinderella lives a mundane life doing whatever her evil step-mothers tell her to do, and all she dreams of is going to the ball and one day a fairy Godmother makes this wish come true and she lives happily ever after.

In 2015, Cinderella will have a new reimagining via Disney who have previously made a cartoon film, telling the story. This version is going to be live action and will star Lily James (Downton Abbey, Wrath Of The Titans) as Cinderella, Richard Madden (Game Of Thrones, A promise) as Prince Charming, Cate Blanchett (The Lord Of The Rings franchise, Hanna) as Lady Tremaine and Helena Bonham Carter (Les Misérables, Fight Club) as The Fairy Godmother. Given the war-driven fantasy works some of these actors have been in (namely Blanchett in Lord Of The Rings and Madden in Game Of Thrones), can we expect an element of this in this new Cinderella film? Probably not, but it should still be a fun film at the very least for both children new to the story, and people who'll remember seeing the previous version.

The film is directed by Sir Kenneth Branagh who you may know best for playing Gilderoy Lockhart in Harry Potter and The Chamber Of Secrets, but he has also had great success directing films. A recent example being 2011's Thor.