An arch approach makes this bonkers thriller rather enjoyable, even if it never quite cracks the surface. The story comes from the Edgar Allan Poe story The System of Doctor Tarr and Professor Fether, written in 1845, so director Brad Anderson (The Call) has fashioned the movie as bit of riotous Victorian mental institution nuttiness. Cue the mad-eyed acting, gothic production design and ludicrously batty plot. But if you take it for what it is, it's pretty entertaining.

It takes place in December 1999, as the new century is about to dawn and young doctor Edward (Jim Sturgess) arrives at Stonehearst Lunatic Asylum in a freakishly isolated corner of England. Instantly smitten with the inmate Eliza (Kate Beckinsale), Edward struggles to concentrate on the tasks given to him by his sinister boss Silas (Ben Kingsley), while being constantly watched over by the glowering groundsman Mickey Finn (David Thewlis). Silas' revolutionary system of treatment involves indulging the patients in their specific delusions, which has created a deranged sense of community in the sprawling hospital. Then one night stumbling around in the darkness, Edward discovers a group of people locked in prison cells in the basement, and their leader Benjamin (Michael Caine) claims to be the true head doctor. Yes, the inmates have taken over the asylum!

This premise allows the cast to indulge in a variety of hilariously shifty performances, hamming up every scene with constant innuendo. There isn't anyone in this place who looks remotely sane. Sturgess is fine as the dull Edward, while Beckinsale keeps her character's madness just out of sight, so both of them pale in this colourful company. Kingsley and Caine camp it up marvellously, while Thewlis adds a strong sense of menace and Sophie Kennedy Clark almost steals the film as an amusingly sex-mad virginal nurse. It's also worth watching the background players, as each has a ball his or her brand of craziness.

Stonehearst Asylum follows the plot of Edgar Allen Poe's short story The System of Doctor Tarr and Professor Fether. It is a story about Edward Newgate (Jim Sturgess) - a medical school graduate in the 19th Century who travels to the titular Asylum to gain 'clinical experience'. It is here that Newgate meets Silas Lamb (Ben Kingsley) and Eliza Graves (Kate Beckinsale), the latter of which he becomes instantly infatuated with. Almost at once, things start to creepy as Edward encounters some of the inmates and realises that perhaps his new colleges are not entirely concerned with following regulations. As the plot thickens and Edward finds himself spiralling further down the rabbit hole, the questions seem pile up. Why does one of the inmates claim to be the asylum's superintendent? Why are the doctors so gleeful when using such barbaric 'treatments'? And why does the man in charge seem so adamant that 'we're all mad'?

Based on a true story, this warm drama uses sharp humour to keep from tipping over into sloppy sentiment. It's still hugely emotional, but in a shamelessly entertaining way. And it gives Judi Dench and Steve Coogan characters they can really sink their teeth into as the twists and turns of the real events unfold.

In 2002, cynical London journalist Martin Sixsmith (Coogan) has just been sacked from his job as a government spin doctor, so his editor suggests he try a human interest story to get back to work. He hates the idea until he meets Philomena (Dench), a retired Irishwoman who was raised by nuns in a workhouse, where she was forced to give her baby son up for adoption some 50 years ago. She'd like to know what happened to him, so Martin accompanies her back to Ireland and then on to America, where the babies were sold. But their search doesn't go as expected, and what they discover is startlingly moving.

As he did with The Queen, director Frears gives the film a gentle, light tone that helps balance the intensely serious subject matter. He also encourages his cast to deliver understated performances, which is especially effective for the usually broad Coogan. And of course Dench is simply wonderful as a feisty straight-talker who isn't thrown by anything she encounters. Gurgling under everything is an astute look at religious heritage: Martin is a lapsed Catholic who can't understand why Philomena still has a devout faith, because of what the church has done to her. And as the story continues, he begins to understand the strength this gives her.

The Dramatic Side Of Steve Coogan In 'Philomena'

The critics have enjoyed Coogan's detour into drama

Steve Coogan is known for his seminal character: Alan Partridge. He even mocked the disparity of popularity between his work with a live show entitled ‘Steve Coogan Live - As Alan Partridge And Other Less Successful Characters.' 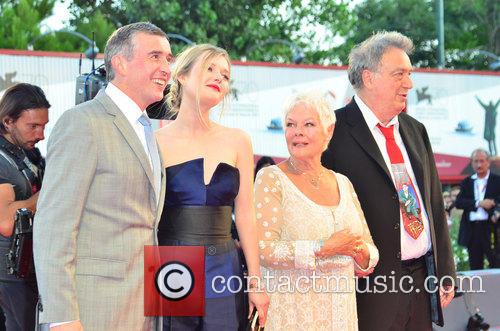 With such a well-known character, indeed, Partridge is one of the U.K’s most popular comedy creations; it’s difficult to break free of the comedy mould. Especially when you’ve just been all over the big screen in a comedy feature. But Coogan was striving for something more than making people laugh.

Continue reading: The Dramatic Side Of Steve Coogan In 'Philomena'

Judi Dench stars as Philomena Lee in the emotionally moving and shocking true story based on Martin Sixsmith's novel: The Lost Children of Philomena Lee released in 2009.

In a controversial pregnancy during the 1950's, Lee was sent to a Catholic home for unmarried mothers where she gave birth to her son before authoritarian, religious nuns forced the mother to give up her only child who was sent for adoption in America.

After 50 years of searching for her son she achieved very little but instead found political journalist Martin Sixsmith (Coogan) who would end up taking her to America to find the truth about her son in a heart gripping and extraordinary story that celebrates human love, loss and the celebration of life.

Stephen Frears' new film Philomena stars Dame Judi Dench and Steve Coogan. The first picture of the film was released yesterday (Monday 16th July) and shows the two British actors in an evidently emotional scene. Coogan looks at Dench with a concerned expression as she holds a photograph.

The film, directed by Frears, follows one woman's journey to discover a son she was forced to give up fifty years before. Young Philomena Lee (played by Sophie Kennedy Clark), according to the BBC's synopsis, fell pregnant in Ireland in 1952: she was then taken to a convent as a 'fallen woman'. As a consequence of her strict surroundings, Philomena was encouraged to offer her baby for adoption.