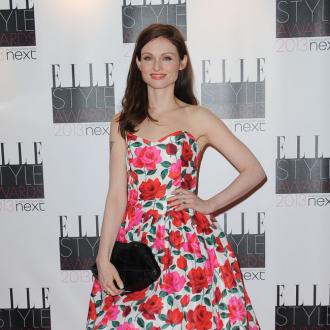 The 'Love is a Camera' singer - who performed on Friday (27.06.14) at the world famous music event at Worthy Farm in Somerset, South West England - claims her experience this time around has been very different now she's a mum to children Sonny, 10, and Kit, five, who she has with husband Richard Jones, and she was bonding over parenthood with 'Hard Out Here' singer Lily after her set.

She told Bang Showbiz: ''I saw Lily Allen backstage but I missed her set, I heard she had huge milk bottles on stage, we just talked about bringing babies to festivals.

''My eldest has been to Glastonbury when The Feeling played the Pyramid Stage and he was only four. I would bring them here.

''We took the kids camping about three weeks ago to the New Forest but we wouldn't do the whole camping thing at a festival.''

Sophie got caught in the thunderstorms yesterday (27.06.14), but claims she was ''quite prepared'' for bad weather.

She said: ''I actually thought yesterday was going to be more of a washout than it was. I've got a tour bus and I've done Glastonbury twice now. It's totally different this time because the first time I was 19 and in a band. This time I'm a solo artist with five solo albums to my name.''

The 35-year-old pop star performed tracks from her current album 'Wanderlust' and then some of her disco hits from her early career during her set on the Avalon Stage.

She said: ''The set was quite bonkers. We did the new album and then I had a costume change and then we did disco.

''The response to the album has been overwhelming. I have a silver disk and it's done so much better than I ever thought it would. I'm very lucky.''

Sophie is a fan of Glastonbury and made sure she caught headliners Arcade Fire, who performed after a huge thunderstorm knocked the power out in a number of areas.

She said: ''I also saw Skrillex and M.I.A and they were great.

''It's the festival everyone talks about and I think all the artists that play bring their best game.''

Rita Ora also refused to let the thunder and lightening ruin her fun and held a private rave in her VIP Winnebagos.

She turned the music up, got everyone dancing and, at one point, was seen using a blu e-Cig as a glow stick.