Sofia Vergara's Dress Ripped And Pulled Down In NYE Brawl 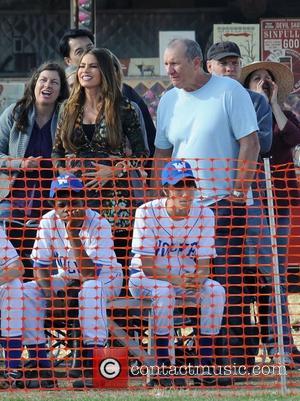 Sofia Vergara's dress was ripped, torn and pulled down during a brawl at the Story nightclub in Miami on New Year's Eve. Her fiance Nick Loeb was thrown out by security after he began fighting with a group at a nearby table, reports the New York Post.

Witnesses say that Loeb got into a heated dispute with the revellers, began pushing and shoving and was subsequently ejected from the building. Vergara - the highest paid actress on television - followed closely behind. An insider said the Columbian star's dress was ruined in the melee, saying "Sofia stepped in to try to calm the situation, but somehow she ended up getting pushed and shoved also. Her strapless dress was torn or pulled down in the melee, exposing her cleavage in front of other people and her son Manolo who was so offended he left the club. It was crazy." Vergara was never hit in the fight, though Nick suffered bruising after the struggle with security. The event was organized by nightlife guru Chris Paciello, whom Vergara dated in the late 1990s.

Earlier in the evening, Modern Family star Vergara had celebrated the New Year at Miami's luxe Delano hotel. She briefly split from Loeb last May, but they reconciled just weeks later. They became engaged in July 2012.