Actress Sofia Vergara Jokingly Threatened To Leave Her Fiance Joe Manganiello If He Refused To Seek Medical Attention After Tearing A Tendon While Shooting The New Magic Mike Sequel. 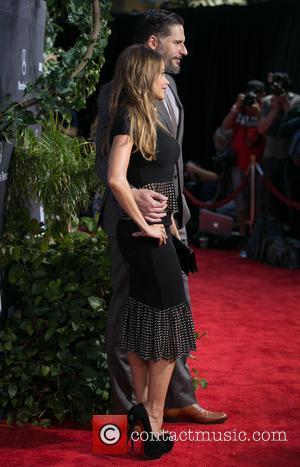 The True Blood hunk reprises his role as Big DICk Richie for the sequel to Channing Tatum's 2012 male stripper movie, but he was left nursing a serious injury after an energetic dance sequence went awry.

Manganiello turned to an onset masseuse to help him fix what he thought was a dislocated bone so he could play through the pain to complete the day's shoot, but his decision didn't sit well with Vergara.

He recalls, "I was on the table and normally a bicep snaps and rolls up into your shoulder and the arm turns black and caves in. That didn't happen so I thought it was a dislocated bone in my arm. This masseuse is trying to work what we thought was a bone back into my arm and Channing said, 'I'll move my routine up and do it today.' I just thought, 'There's no way. I'm not gonna make it tomorrow. My arm is not gonna move.' If we go, we gotta go now...

"So for the next four and a half hours I did this routine which involves this sex swing and these monkey bars that I have to run and jump up on top of... We made it through and I got a pat on the back, 'Bro, that was amazing,' and an ice pack.

"Sofia was there that day and we got back to my trailer and she closed the door and said, 'If I see you at the f**king gym tomorrow, we're done! I'm going to f**king leave you!'"