Sofia Vergara has been named the highest-earning television actress by Forbes magazine, with earnings of $19 million over the last year. 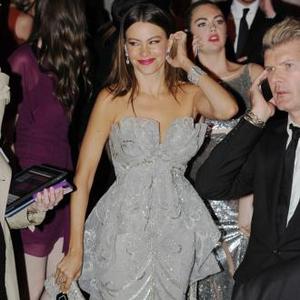 Sofia Vergara has been named the highest-earning television actress.

The 'Modern Family' star earned around $19 million between May 2011 and May 2012, thanks to her role on the show, endorsement and licensing deals - including a clothing line at KMart and advertising campaigns for Diet Pepsi, Burger King and Cover Girl - and earnings from her media company LatinWE, figures compiled by Forbes magazine show.

The acclaimed financial tome placed Kim Kardashian in second place with $18 million over the same time period, $7 million more than her sister Khloe Kardashian, who placed fifth, made in that year.

'Desperate Housewives' actress Eva Longoria ranked third thanks to her $15 million earnings. While she and her co-stars on the drama - Felicity Huffman, Teri Hatcher and MARCIA CROSS - all earned around $8 million for the final series of the show, Eva's earnings were boosted by endorsement deals with L'Oreal and Pepsi Next, sales of her cookbook, two fragrances and earnings from other acting roles.

Forbes base the list on estimations of upfront pay, residuals, endorsements and advertising work and do not deduct agent fees or other expenses.