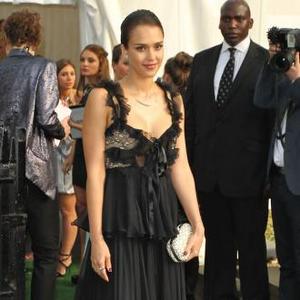 Stars from around the globe attended the annual ceremony, held in Berkeley Square, London, by the UK's Glamour magazine, including Kelly Brook, Amanda Holden, Kylie Minogue and Katherine Jenkins.

As she arrived in a lace black gown, Hollywood star Jessica Alba said she was looking forward to hanging out with her A-list friends at the event.

She said: ''It took me about an hour to get ready. I'm really looking forward to just celebrating women and seeing people here that I haven' seen very much because I'm always working, it's nice to just hang out with some of these glamorous people.''

After a celebratory dinner, the awards got underway, with the first prize of the night going to singer Jessie J, for Solo Artist of the Year.

She was followed a little later by Sofia Vergara, who was named Comedy Actress of the Year for her role in 'Modern Family'.

Accepting her award, she said: ''This is bl***y amazing! I'm so happy to be here, Glamour, thank you! To be part of this with all these glamorous people is amazing. Thank you so much, I hope to be back again.''

Budding actress Lily Collins - daughter of pop star Phil Collins - received The Breakthrough Of The Year trophy for her role in 'Mirror, Mirror'

She said: ''It really is so lovely to be back home in England, I grew up here, I'll never forget being in the countryside and stealing my mum's magazines.''

Glamour Women of the Year Awards 2012 - full list of winners

Presenter of the Year - Holly Willoughby

Writer of the Year - Caitlin Moran

Entrepreneur of the Year - Jessica Alba

Band of the Year - Florence + the Machine

US TV Actress of the Year - Lea Michel