Actress Sofia Vergara Has Urged Members Of The Press To Stop "Allowing" Her Ex-fiance To Put Her Down And "Invent Things" In The Media As They Continue To Battle Over The Frozen Embryos They Created When They Were A Couple. 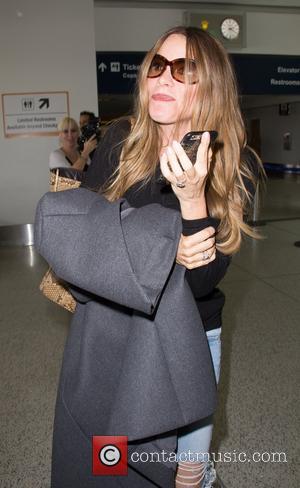 Nick Loeb recently filed suit against the Modern Family beauty in an effort to prevent her from destroying the fertilised eggs they had preserved during their engagement, and he stepped up his fight by going public with the dispute in an op-ed for the New York Times last week (ends01May15), insisting the debate is about "life, religion and parenthood".

Vergara's lawyer hit back at the lawsuit, insisting his client had no intention of terminating the embryos, and the actress broke her silence about the drama on Monday (04May15), when she claimed it would be "selfish" for either herself or Loeb to bring the eggs to term with the help of a surrogate without the other's permission - a violation of the contract they both signed with the fertility clinic.

Now Vergara, who has since become engaged to Magic Mike hunk Joe Manganiello, is hoping to move on from the legal action by addressing the suit one final time, telling U.S. TV's Good Morning America, "I really wanna make this the last time I talk about it because I don't think it's fair."

In the interview, which aired on Thursday (07May15), Vergara accused Loeb of trying to "take advantage" of her fame by using the press to air his grievances, even though there is little, if anything, he can do legally to change the fertility office's rules.

She says, "I don't like promoting my private life... I don't wanna allow this person to take more advantage of my career and try to promote himself, get press, for this. This shouldn't be out there for people to give their opinion when there's nothing to talk about. There's (legal) papers signed."

Taking aim at the press, she continues, "I don't understand why the media is allowing a person to just try to put me down and try to make it (like) something ugly is happening when nothing is happening... Why is the press allowing somebody to invent things and create press for himself? He's not an actor, he's not a celebrity. It's like, why? Why are they allowing him to do that?

"But I'm not sad, I'm grateful. I have to enjoy what I'm living right now. In the life of an actress, you have very big ups and downs. I'm super happy with Joe."

Meanwhile, Loeb took his argument to rival U.S. breakfast show Today, claiming the battle is more of an "ethical" issue than a legal one, revealing he is willing to take full financial responsibility for the babies if he is allowed to have the embryos brought to term.

He says, "It has nothing to do with whether it's her baby or a baby. Lives were already created... I wouldn't toss them aside...

He adds, "I think Sofia is a wonderful, wonderful woman... I don't hate her at all."

The first hearing in the lawsuit will take place on 22 May (15).