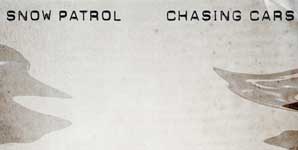 THIS VIDEO CAN NOW BE FOUND HERE

'Chasing Cars', was first premiered on the band's support to U2 in Summer 2005, quickly established itself as a favourite of reviewers and fans alike on release of the album, and has already become one of the many high points of the band's live show.

'Chasing Cars' has proved to be a huge success already in the US following it's inclusion in the dramatic final scenes of one of the countries most popular TV shows.

Currently midway through their second sold out US tour so far this year, Snow Patrol have enjoyed an amazing time since the release of 'Eyes Open', which became a platinum album after just two days on sale. In addition to their first number one in the UK and Ireland, the album has given them their highest chart positions around the world, and currently resides in the UK top 3.

Snow Patrol - Take Back The...