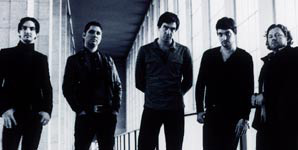 Snow Patrol's UK leg of their world tour includes an impressive three night stint at the O2 Arena in London, but tonight sees them in Manchester promoting their fifth album, 'A Hundred Million Suns'. A fully booked schedule will seem them perform as far away as Australia and Africa, before returning to these isles in the summer for festival slots.

One of the keys to an enjoyable live show is the set order and clearly Gary Lightbody and co. have put much thought into tonight's display. An opening salvo that includes 'If There's A Rocket Tie Me To It', 'Chocolate' and 'Spitting Games' means some of their more energetic and popular songs quickly gets the audience into a joyous bouncy mood, so that mellower album tracks from their current record such as 'The Golden Floor' don't lower the tempo too detrimentally. Lightbody easily picks up the momentum though, having a little fun by turning 'Shut Your Eyes' into a volume war between genders, before unveiling one of the aces in the band's sleeve in the form of 'Chasing Cars'. By placing it mid-set and unannounced it is all the more enjoyable and by the final chorus it wouldn't be surprising if the roof of the great hall actually came off, such is the volume emanating from the capacity audience inside. Snow Patrol's other great anthem is of course 'Run' and when the band's frontman appears in the middle of the audience with just an acoustic guitar to perform it he proves that coupled with the backing of an arena audience as a choir the song certainly doesn't need a talent show winner to give it an 'x' factor.

Judging by their reactions when performed the fans have taken 'Crack The Shutters' and 'Take Back The City' into their hearts, while 'Open Your Eyes' is a popular choice to end the main set. At 16 minutes long, 'The Lightning Strike' is ambitious by anyone's standards and despite some impressive psychedelic animations perhaps isn't the best use of the encore, however by keeping 'You're All I Have' in their locker until last does guarantee ending a clinical performance on a positive note. When Snow Patrol were announced as headliners for this year's T In The Park and Oxegen some were sceptical of whether or not they were worthy of the position, but on this evidence they could just well provide some of the biggest sing-a-longs of the festivals.