Review of A Hundred Million Suns Album by Snow Patrol

Album review of 'A Hundred Million Suns' by Snow Patrol. 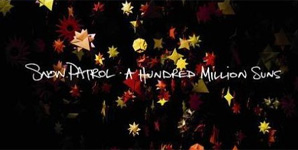 Northern Ireland rockers Snow Patrol return with the follow-up to 2006's 'Eyes Open', which spawned the ubiquitous-on-radio 'Chasing Cars'. Jacknife Lee once again helms production duties and the band will be hitting the road in spring 2009 for a UK arena tour.

Whilst not their third release, 'A Hundred Million Suns' is album number three since the quartet made their breakthrough and comes up against the likes of Razorlight, Keane and Kaiser Chiefs in the forth quarter of 2008. The first two of that list have produced redefining records that have surprised and delighted in equal measure, while the Chiefs disappointed with an uninspiring collection. Unfortunately this is also the case here; where the Snow Patrol formula remains very much intact despite Gary Lightbody dropping lyrics of failed love for happier situations. Too often the songs are dull and uninspiring, particularly 'Lifeboats' and 'The Golden Floor', while even grander productions such as 'The Planets Bend Between Us' are bland and forgettable.

Anyone looking for another 'Chasing Cars' may be attracted to the piano-led 'Crack The Shutters', which features a sing-along chorus, while 'Engine' drops the MOR for something more experimental. It's only on closer 'The Lightning Strike' that the imagination is really captured, an ambitious three-part monster in the ilk of Muse's 'Knights Of Cydonia' or Green Day's 'Jesus Of Suburbia'. It's not enough to lift a record which won't win over anyone not already a fan and frustratingly leaves you wondering would could have been if the band had been as brave with the other eleven tracks.