Snoop & Dr. Dre Bring Tupac Back From The Dead 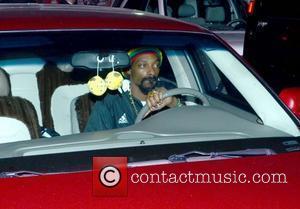 Snoop Dogg and Dr. Dre brought Tupac Shakur back from the dead for a showstopping finale to the first Coachella weekend on Sunday night (15Apr12).
Shakur appeared as a hologram on the festival stage after a tribute performance of his hit California Love and the late star 'teamed up' with Snoop on Ain't Nothin' Like A Gangsta Party after an eerie solo rendition of Hail Mary from beyond the grave.
The ghostly apparition drew mixed reactions from those watching the set online, with one fan calling it "wrong on so many levels" and others stunned by the Tupac trick, tweeting, "Wtf!"
But most rap fans were thrilled, with many paying tribute to Shakur and others stating, "This is dope," and, "This is unbelievable". And one fan tweeted, "I told y'all Tupac wasn't dead!"
Snoop and Dr. Dre's opening Sunday night at the two 2012 Coachellas was "the best rap concert of the decade", according to one fan.
It was somewhat of a who's who of rap, with Eminem, 50 Cent, Wiz Khalifa and Kendrick Lamar joining them onstage, while Warren G teamed up with the hip-hop icons for a tribute to the late Nate Dogg and rap trio 213.
Shouting out, "If my homie Nate Dogg was here he'd wanna hear something like this..." Snoop performed Ain't No Fun (If the Homies Can't Have None) with Warren G, as a photo slideshow of Nate Dogg flashed up on big screens behind and over the stage.
Eminem appeared to rap through I Need a Doctor immediately after the Tupac Shakur tribute and then joined his mentor Dre on Forgot About Dre.
50 Cent took to the stage with G-Unit sidekick Tony Yayo for a brief solo set, performing P.I.M.P. and In Da Club, and Wiz Khalifa joined Snoop for a rendition of their hit Young & Wild & Free.
In between the superstar turns, official headliners Snoop and Dre celebrated their 20-year partnership with a set that included Drop it Like It's Hot, Next Episode and Gin & Juice.
The duo also performed Dre's first solo single, Deep Cover (187), Nuthin' But a G Thang and a brief cover of House of Pain's Jump Around.
The rap superstars closed their 60-minute set with their classic hit Still D.R.E. and it was clear the reclusive producer/hitmaker had really enjoyed what one Twitter.com fan called "Epichella". He left the thousands at the festival with the line, "Coachella, I wanna say thank you for all the love over the years."
The stunning weekend festival - perhaps the best ever - also featured headlining performances from The Black Keys and Radiohead and other highlights from Florence & The MAChine, Miike Snow, Noel Gallagher's High Flying Birds, M83, The Shins, Bon Iver, A$AP Rocky, Pulp and Arctic Monkeys.
The acts will repeat their performances and festival time slots at a second Coachella next weekend (20-22Apr12).