Snoop Dogg and Dr. Dre have in the studio together working on new music. The 'Gin and Juice' rapper was discovered by Dre in 1992. 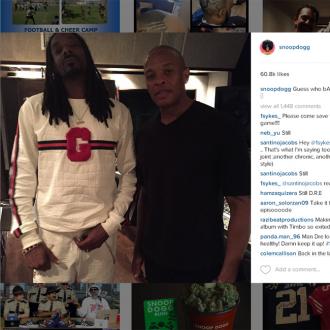 Snoop Dogg and Dr. Dre have reunited to work on new music.

Snoop captioned the snap, ''Guess who bAcc (sic)'', alongside a host of emojis of fireworks, a gun, a microphone and a wad of cash, sparking a host of excited responses from fans.

As well as reuniting with Snoop, Dr. Dre, 50, also recently spent time with his former protégé Slim The Mobster in the studio.

Snoop's most recent album 'Bush' was released in May and was produced by Pharrell Williams.

On the record, the rap legend also collaborated with Gwen Stefani, Stevie Wonder and Kendrick Lamar on the LP.

While making the record Snoop gave some advice to 27-year-old rapper Kendrick on how to have a long-lasting career in the music business.

Snoop previously revealed: ''I told him to always challenge himself and be willing to listen. Always put yourself on a level where you're eye-to-eye with everybody. Never play bigger than anybody because you never know when it's gonna be over.

''He grew up watching his West Coast O.G.s, like Ice Cube, Eazy-E and Snoop Dogg. He had a pretty good blueprint to work with, and that's why he's doing it so well.''