Snoop Dogg isn't really someone who needs much of an introduction. He's a gangsta rap pioneer, he's released some quality albums packed with his signature laid-back swagger and polished flow, and, until 2013, he'd stayed pretty true to his defined sound. That all changed with the release of 'Reincarnated' under the name Snoop Lion. That 'reggae' album, and I use the term very loosely, was hugely disappointing, and reeked of a quick cash-in over and above a genuine tribute to a genre that has clearly been very inspiring to the Doggfather. So, when 'Bush' was announced, and along with that came the news that Pharrell Williams would be producing the entire album, a partnership that had worked fantastically with the 2004 'R&G: The Masterpiece' album, I was excited for a return to the glory days. Pharrell's talent and musical ear cannot be denied, even though I'm not personally the biggest fan of his most recent, if indeed most successful, work with last year's 'Girl' album, but surely two musicians of this calibre, given their previous track records, would collaborate to release an album that would be on repeat for weeks. 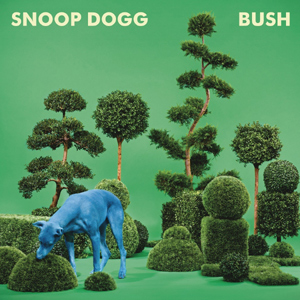 I can't say that's exactly what's happened though. I was hoping for a return to hip-hop for Snoop, following 'Reincarnated''s reggae direction, but instead he flips over to funk for the majority of 'Bush'. There are a couple of rap verses, and a couple of decent enough guest spots from a number of MCs, Kendrick Lamar's verse on 'I'm Ya Dogg' is dope, but pretty much everything contributed from Snoop Dogg on 'Bush' is sung, and although his vocals are smooth and charismatic, they're just not skilled enough to be convincing across the entirety of the album. Tracks like 'I Knew That' highlight the weaknesses in Snoop's vocal, with some of it coming across overly processed and unnatural. Sometimes it works though; the hook on 'Awake' is tasteful and well executed, the verses pale in comparison, however, with weak lyricism in the brief rap and a heavily manipulated Pharrell Williams pre-chorus vocal - and he can actually sing!

Most of the highlights on 'Bush' come on tracks where Snoop is joined by a guest. The album's opener 'California Roll', which features none other than Stevie Wonder, is a dope opener, and sets the tone of the album effectively. 'Peaches N Cream', which was also the album's first single, is a classy, funky track with an infectious vibe and a catchy hook. Snoop is joined by long term collaborator Charlie Wilson, who adds to Snoop's charismatic performance, and it includes one of the very few places he actually spits, and although lyrically his verses aren't anything that will make your jaw drop, he does sound calm and cool on the upbeat, disco-esque track. Pharrell's influence is clear, and Charlie Wilson's sophisticated, soulful vocal is a nice addition. However, although Kendrick's verse is definitely up to standard, Rick Ross' appearance on 'I'm Ya Dogg' feels rather lacklustre and, quite frankly, 'Run Away' could have done without Gwen Stefani, who just sounds out of place.

This isn't the first experiment with funk from Snoop Dogg. Of course, the influence has always been there, but the track 'Cool' from 2008's 'Ego Trippin' album bridged Snoop's style and the funk influence perfectly, and his 2013 EP with Dâm-Funk, entitled '7 Days Of Funk' marked a full jump into the genre. A full album though? It's a bit too much, and when Snoop is singing for pretty much the duration, the limitations of his vocals become quite apparent. Pharrell's production is on point though, with a vibe that features the hallmark characteristics of the funk music Snoop has been influenced by, with groovy basslines, cool guitar licks and well-placed synth lines lacing each track, creating a cohesive vibe throughout. It's just a shame Snoop lacks that natural ability to really pull this off.