Review of Smugglers Festival 2012 held at a secret location just outside Deal, Kent.

Way back up in the woods (In a 'secret' location just outside Deal) among the evergreens, there stood a log cabin made of earth and wood......where (for three days, and for only the second time) lived country boys (Well men actually if facial hair is a marker...this could easily have been a Terry Waite and Abe Lincoln convention hosted by Jim Royle to the uneducated visitor) and girls name of Will and James and Sophie and ..well you get the picture. 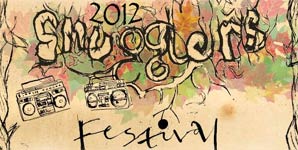 The Smugglers Festival was in the main blessed by the weather for its second incarnation. In an area representing just 4% of Christopher and Pooh's patch the select guests were treated to some very enthusiastic and intimate sets that were all bound by a singular commonality; honest passion. Each of the artists played every note like it was their last and put heart and soul into each song. The energy generated by the audience seemed to flow back and forth between the bands and festival goers alike. Each fed off each other in a beautifully symbiotic relationship that created a fantastic atmosphere across the site.

There was plenty to keep engagement alive throughout the three days with some fabulous art installations that also doubled as staging areas for the Chaucer loving Canterbury collective of Sondry Folk.(Including appearances from the delightfully titled Professor Appleblossom and the equally enchanting Mr McMoon) There was a Kids area, cinema, Absinthe bar, homely camp fires and some random acts of varying complexity. The fiery rings of the hoola-hooping performance artist were particularly impressive.

The family friendly festival was full of kindred spirits and likeminded people that all seemed to blend and bond for three days of chilled out entertainment. There was no sponsorship from Vodaphone or Tennants, no Drum N' bass tent, Roller Disco or early hours casino and no one just dipping in to catch a headline act. Everyone was wrapped up in the experience of the whole thing from the cravatted arty Deal types through to the cone headed ladies and floral Mohican wearing ex-punks.(If there were an Interflora competition for original and innovative head gear this man would have won hands down)

The bands came to enjoy themselves too. Tom Williams, topping the bill on Sunday in The Smugglers Inn, gave a typically incendiary performance as he tore through a blistering set...remarking afterwards that they'd all had "A ruddy marvellous time". Fellow Kent folk Zoo For You provided some great funk fuelled interpretations as they capped off Friday in style over on the main stage and local Canterbury boys Boot Lagoon provided some fantastic instrumental jazzy psychedelia to accompany the hay fight finale. The more outwardly gentile, but just as biting, Ladies Of The Lake gave their take on some well chosen traditional folk ditties (My daughters are still singing 'Me Husbands Got No Courage' after seeing them in the Folk tent at LOTF 2010!) and the altogether rather more mental Bucket Boyz once again whipped up the assembled throngs as they belted out their frenetic and frenzied mix of percussive, pulsating and primal tunes.

The main tent bore witness to many highlights. There was a fabulous early evening set, full of his customary lyrical genius, from Will Varley, including a new song with which he closed out his set about Nick Clegg's Tetris skills, the prince of some country he doesn't know and a limo salesman about to declare bankruptcy.(Brilliant and very much appreciated by the enthusiastic onlookers). Syd Arther (The closest thing there was to a boy band all weekend) filled the air with a wondrous wash of trippy psychedelia that was a showcase of fine musicianship and then there were the 'hosts', Cocoslovers, from just down the road in Deal. Playing in front of an eager party of particularly partisan punters the ensemble raised the roof with their mix of worldly infused fine folk. Founding member, and catalyst for the Smugglers Festival, Will Greenham said it was "The best gig they'd ever played. The crowd were great, singing along to every song, it was just fantastic, the best we've ever played."

The Remains Of Johnny Cash, Poggy Hatton, Private Widdle, Macavity's Cat (Not a very good name, not a very good band), The John Langon trio and the sensational Senegalese singer-songwriter Nuru Kane, among others, helped to ensure that all three days were eclectic, fun filled and interesting affairs. The Black Douglas cafe provided the coffee and crepes while the Proud Fox rustled up some more substantial sustenance and local independent Ripple Steam Brewery hooked up their IPA to help drench the throats of the Real Ale lovers among the crowd. The air was heavy with (no not unspoken knowledge) but exotic aromas and the whole atmosphere was one of surreal suspended reality where the real world disappeared for a while and life was somewhat, all too briefly, sweeter.

If you go down to the woods.....next year make it the ones just outside Deal.