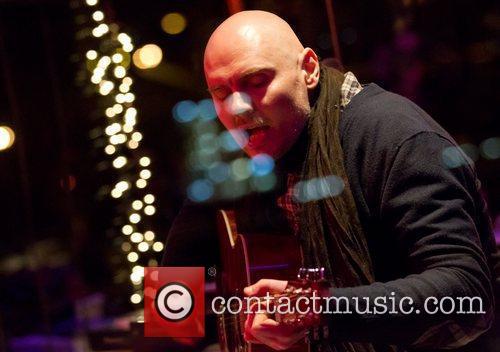 Joining the band on the album is Smashing Pumpkins only other official member Jeff Schroeder and  Motley Crue drumming legend Tommy Lee, the latter of whom Corgan describes as bringing his characteristic 'power and grace' to the record. Producer Howard Willing re-teamed with the band on the album, acting as a 'traffic cop to point out where the Pumpkins' sound needed to come forward'.

'For that I'm appreciative', says Corgan. 'Because it was never the idea of the band as conceived to live in the past, or to become a machine of sentiment.'

As for the second album, Corgan reveals it is at 'the other side of the sonic moon' from 'Monuments...', and that it aims to be a little more 'personal'. There's no telling how either album will fare against 2012's 'Oceania', which reached number 4 in US charts, but if charming new single 'Being Beige is anything to go by we're certainly looking forward to it.

More: Read our review of 'Oceania'

Listen to 'Being Beige' here: