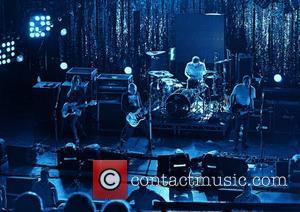 Picture: The Smashing Pumpkins performing at Manchester O2 Apollo on the first night of their UK Tour Manchester, England - 11.11.11

The Smashing Pumpkins are donating a portion of profits from their Monday night (10Dec12) concert in New York to aid the ongoing Hurricane Sandy relief effort.

Frontman Billy Corgan and his bandmates were forced to postpone plans to hit the stage at the Barclays Center in Brooklyn on Halloween (31Oct12) as a result of the post-tropical cyclone, which caused devastation and shut down the city's transportation system when it lashed America's East Coast in late October (12).

The concert was rescheduled for Monday and the band has made a select number of tickets available for just $25 (£16). The cash paid for these seats will be donated to the Brooklyn Recovery Fund.

The Pumpkins aren't the only musicians raising money for Sandy relief - Bruce Springsteen, Paul MCCartney, the Rolling Stones, Billy Joel and Jon Bon Jovi will be rocking out at Manhattan's fabled Madison Square Garden on Wednesday (12Dec12) for the much-anticipated 12-12-12 Concert for Sandy Relief benefit show.