Review of That's The Way Single by Smashing Pumpkins 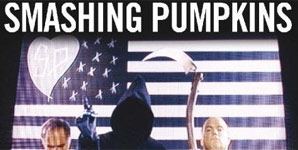 It pains me to write this review, as Smashing Pumpkins used to be up there as one of my favourite bands ever. In the glory days of 'Siamese Dream', I could little envision that the band would ever put out any material that I wouldn't immediately fall in love with.

And then the band broke up. And then they reformed. And then they put out this single. And with this single it became patently clear that in that time the Smashing Pumpkins had lost a little something along the way, not least two of their original four members.

'That's The Way' reaches for the dizzy heights of 'Today', the sweeping ecstasy of 'Tonight, Tonight', and finds only bland riffs, blander singing and the blandest of lyrics. Forgettable and old-fashioned sounding, this single falls short of anything even close to aspiring to the stature of the Pumpkins' back catalogue. What the Pumpkins had before that made their music truly great was that extra quality, that originality and that little bit of soul that was almost palpable on singles such as 'Disarm' and 'Bullet With Butterfly Wings'.

Smashing Pumpkins would benefit from a listen to their back catalogue, which might prevent them from churning our sentimentalist junk like this single in the future.