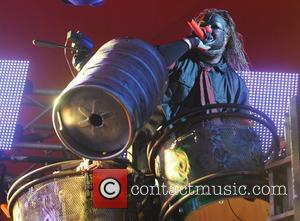 Slipknot star SHAWN CRAHAN is eyeing a move into politics after he was nominated to run for the position of Iowa Governor at the state's upcoming elections.
The clown-faced drummer, who grew up in Iowa, was put forward by a local independent newspaper, with editors at the Cityview publication praising the star's love of his native state and his ability to attract young voters.
Crahan has laughed off the prospect of running in the November (10) election, but admits the article has made him consider a career in politics in the future.
He tells Britain's Kerrang! magazine, "I swear that one day, I'll run for mayor. I want to bring people together. If I wanted to get a little more twisted or worldly, in a crazy way, politics would be it. But, right now, I'm a f**king rock star.
"I was talking to my kids (about the article). I was like, 'Isn't this funny? Half of Iowa would think it would be cool. The other half would bash me over the choices I've made in my life.' A person like me will always get bashed, for the songs I write and the crazy s**t I've done in Slipknot. But, as mayor, I could cut through all that c**p and get things done and make a difference."