Corey Taylor Not A Fan Of The Grammys 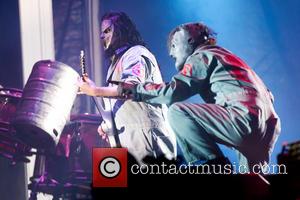 The often masked rocker, who has been nominated 10 times as part of Slipknot and Stone Sour, claims the annual event is nothing more than a televised music show.

He's particularly irked by the Best Metal Performance award, which Slipknot won in 2006 for their single Before I Forget, admits he's convinced voters "threw f**king darts" to pick a winner.

He says, "There's two schools of thought. It's, like, 'Well, we're just gonna try and vote for the most obscure Norwegian black metal f**king band... with illegible font. We're gonna give it to you tonight'. Or it's, like, ' 'Well, this is everything that has been played on the radio for the last five minutes... We're gonna f**king celebrate you. Blah blah blah'.

"Old people vote. I'm convinced that's the reason we won - because an old person went, 'Slipknot! I read a magazine article about them. They've been around. Here you go. Take it. The kids are gonna be real happy'.

"You look at it, and you're, like, 'F**kin' Judas Priest won one for a live version of a song they released 40 years ago, and the live version was released 20 years before that. And they only re-released it because of a box set. And they gave it to them? I'm, like, 'F**king what?' It doesn't mean anything. I mean, that's like trying to hit a f**king needle with another needle. You have one metal category, you have one basic rock category, and you've got bands like Fun winning it. And I'm, like, 'Really?'"