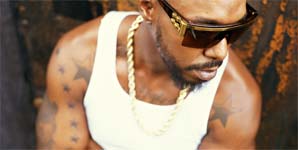 Soul icon Sleepy Brown, of Atlanta's famed Dungeon Family, is using his platinum touch to give the ladies some. And we love him for it. "I felt like a lot of the R&B out right now was very club oriented, and I wanted to make something that stood out from that." says the 30-something singer/songwriter & his debut, Mr. Brown, does just that.

With sensual sounds, falsetto crooning, and sensitive, thoughtful lyrics, the album conjures a futuristic feel with mass appeal. Exemplifying the LP's exciting and groundbreaking, yet polished feel is it's lead single, the Neptunes produced, Pharrell-guested "Margarita." Bouncy bongos, organ hits and hand-claps compliment Sleepy's dream-like vocals and Pharrell's infectious chorus, creating vintage pop-soul. It seems finally the man behind the Grammy winning, multi-platinum success of groups like Outkast and TLC will finally have some plaques and awards of his own in the near future.

Produced mostly by Brown and his Organized Noize brethren, the LP boast work from the Neptunes as well as appearances by Big Boi and Joi, among others. "I just want to bring that real soulful vibe back to the music," he says. "And I think we made something that is just different than anything else that people have heard, even though hopefully, it'll remind them of the records from back in the day."