'Living The Dream' is coming this Fall.

A brand new album is coming soon from Slash featuring Myles Kennedy and the Conspirators, to be released during their forthcoming North American tour this Fall. Little is known so far about 'Living The Dream', but we'll no doubt be introduced later in the summer. 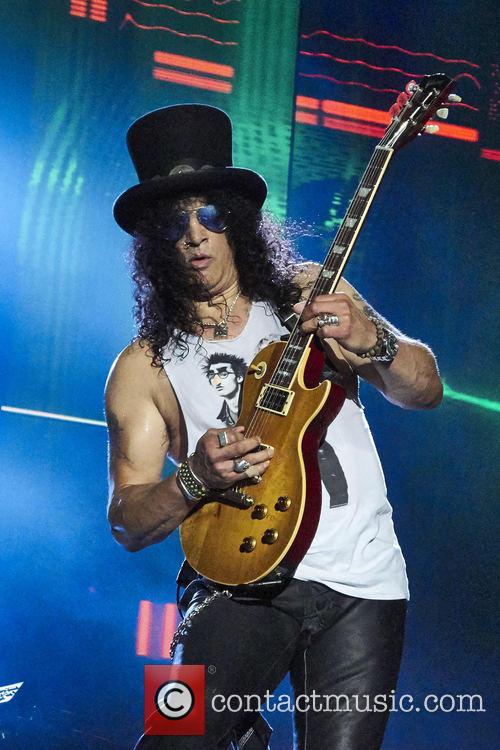 'Living The Dream' is the Guns N' Roses guitarist's fourth solo album, released with his band Myles Kennedy and the Conspirators which includes Kennedy on vocals, Brent Fitz on drums, Todd Kerns on bass and Frank Sidoris on guitar.

It follows 2014 release 'World on Fire' which reached number 7 in the UK, but so far no songs have been released from the new record. In fact, the last singles Slash released were 'Bent to Fly' and 'World On Fire'.

Slash released his first solo album with 2010's 'Slash' with Myles Kennedy and a myriad of other artists from Iggy Pop to Ozzy Osbourne. That was followed by 'Apocalyptic Love' in 2012 which was the first to be billed as Slash featuring Myles Kennedy and the Conspirators.

Since 'World On Fire', the only other work Slash has released has been 'Live at the Roxy 25.9.14' in 2015. Though he did work on a new song with Guns N' Roses entitled 'Shadow of Your Love' for the 'Appetite for Destruction: Locked N' Loaded' edition.

Slash will kick off the 'solo' tour dates on September 13th 2018 at Los Angeles' Whisky A Go Go, and will conclude at Sacramento's Aftershock Festival on October 14th. Slash featuring Myles Kennedy and the Conspirators will also play KAABOO Music Festival in Del Mar and Louder Than Life festival in Louisville.

The September/October dates come amidst Guns N' Roses' Not In This Lifetime tour, between their European leg which ends on July 24th in Iceland and their Asia/Africa leg which begins on November 8th in Indonesia.

'Living The Dream' will be released on September 21st 2018 through Slash's own Roadrunner Records imprint Snakepit Records.