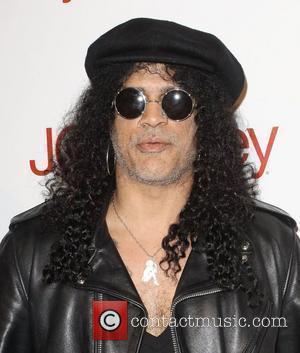 Rocker Slash was lining up Michael Jackson to feature on his solo album when the singer suffered a fatal cardiac arrest.
The former Guns N' Roses star previously teamed up with the King of Pop to record guitar solos on a handful of his tracks - and he regrets not asking Jackson to return the favour by singing on his first solo project.
Jackson died on 25 June (09) - just days before he was due to launch his This Is It comeback shows in London.
Slash says, "When I was thinking about who I wanted to work with, Michael crossed my mind. I thought about doing something that would see him totally cross over into rock.
"But it was around this time last year and he was flat-out rehearsing for the London O2 gigs so in the back of my mind I thought, 'He's not going to have the time.' It's hard to believe he's gone."
And Slash admits he is still angry about how the superstar was treated by the public after his child molestation scandal - despite his acquittal at a 2005 trial.
He adds, "There was this whole eight or nine-year period in the States where he was cast out. I like to believe he was innocent of the stuff he was accused of. He was acquitted and yet he was totally ostracised. Then he died and you had people crying in the streets. Bulls**t. It really hasn't hit home that he's gone yet."