Iconic rocker Slash was ''flattered'' Rihanna impersonated him in her video for 'Rockstar 101', as she is ''all round better looking'' than him. 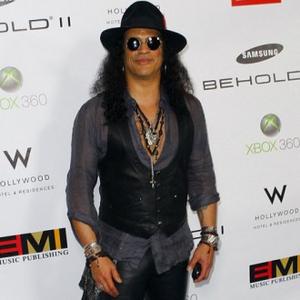 Slash was "flattered" Rihanna impersonated him in her 'Rockstar 101' video.

The former lead guitarist of Guns N' Roses - who recently released his solo album 'Slash' - thought the 'Umbrella' hitmaker did a great job of pretending to be him, as she is "all round better looking".

Speaking at the Nordoff Robbins 02 Silver Clef Awards at London's Hilton on Park Lane Hotel today (02.07.10), the rocker told BANG Showbiz: "She asked me if I would do the video and I couldn't do it because my record was just coming out.

"So she came up with the idea to do me, which I actually think is way better than me doing me, so I was really flattered. She just looks all around better than me."

Slash went on to add that performing at last weekend's Glastonbury Festival in Somerset, South West England, was a unique experience because of the "level of appreciation" he saw.

He said: "I was really honoured to be asked to play and then when I got out there it was probably the only festival I've ever done where I've seen that level of appreciation."

At the event - hosted by Sharon Osbourne - the Velvet Revolver founder was picking up the award for Hard Rock Ambassador of Rock.