Rocker Slash Has Confessed To A Childhood Crush On Head-spinning The Exorcist Star Linda Blair. 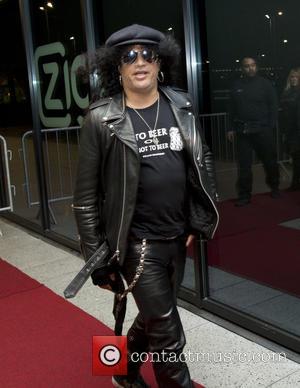 The guitar great tells Fandango MovieClips' I Love Movies the 1973 horror movie had a lasting affect on him as a young film fan - and actress Blair became his first pin-up.

He explains, "As a kid, I ended up having a huge crush on Linda Blair from The Exorcist, and that's just so wrong.

"The first time I saw The Exorcist was in the back of a Volkswagen in a drive-in theatre. Mike Oldfield's Tubular Bells theme was so perfectly creepy for The Exorcist itself. A really great score like that one becomes an essential character in the movie."

Slash admits the film was released at a pivotal time in his development, as he was getting into music at the same time.

He adds, "It was like a rollercoaster ride. I love the tension, the adrenaline rush (of a good horror film) - your heart starts pounding. As a musician, suspense is a major part of the game. It's a similar element to horror movies.

After conquering the rock world with Guns N' Roses and as a solo artist, the guitarist made his filmmaking debut producing the horror-genre feature Nothing Left to Fear in 2013. He is currently working on a new film project.