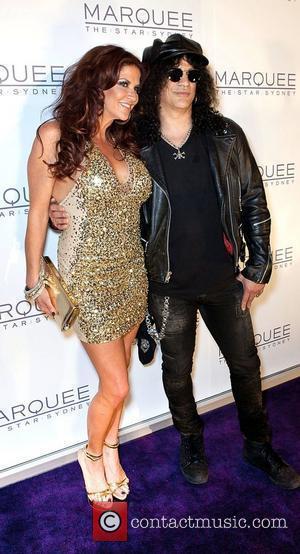 Picture: Slash and Perla Hudson at the launch of Marquee nightclub at Star Casino with a capacity of 1200, makes it Australia's largest nightclub. Sydney, Australia...

Longtime bandmates Slash and Duff Mckagan agreed to reunite the scraps of GUNS N' ROSES for a Rock & Roll Hall of Fame induction ceremony performance just two days before the big show.
The two rockers had a summit meeting backstage at the Revolver Golden Gods Awards hours after learning estranged former frontman Axl Rose had declined the induction honour and announced he would not attend the Hall of Fame gala in Cleveland, Ohio.
Slash tells Rolling Stone, "The day that the press release came out and Axl said he wasn't coming, we had the Golden Gods Awards, and it was in the dressing room there that Duff and I talked.
"We said, 'OK, we're just going to f**king get together and play'."
MCKagan and Slash hit the stage in Cleveland with Gilby Clarke and drummers Matt Sorum and Steven Adler and invited Alter Bridge frontman Myles Kennedy to stand in for the absent Rose.
Slash adds, "I talked to Myles about it; he was apprehensive about getting put in that position, so at first, he turned it down, but finally he said, 'OK, I'll do it.' We got it all together and we put together a little rehearsal the night before and did our thing."
The band ripped through Guns N' Roses hits Mr. Brownstone, Sweet Child O' Mine and Paradise City and the guitarist admits he was more than pleased with what could have been the closest to a band reunion fans are likely to witness.