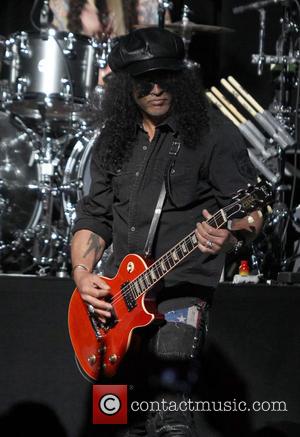 Taylor auditioned to replace Scott Weiland in the band and Slash admits that although the bandmates thought he'd be a great addition, his voice lacked "certain elements".

In a new Rolling Stone interview, the guitarist says, "Everybody was rallying for him (Taylor), and I love Corey to death, but something about it was just a little bit too... You know how Corey sings? It's a very macho kind of thing. But it didn't have certain elements I thought it needed. So we just didn't go down that path. And that was the closest so far."

Slash also revealed the band considered former Skid Row star Sebastian Bach, who originally auditioned before Weiland was hired, as the ex-Stone Temple Pilots star's replacement: "I love Sebastian, but, if you can imagine, it sounded sort of like 'Skid N' Roses'. It was cool, but you knew that everybody who heard it was gonna be, like, 'Oh, yeah, that makes sense'. It was a little bit too predictable."

Velvet Revolver have been on hiatus ever since Weiland was fired as frontman following a falling out with his bandmates in 2009. He briefly returned to front the band at a charity show, but Slash has made it clear he's looking for a new man.