Search Is Back On For Velvet Revolver Singer 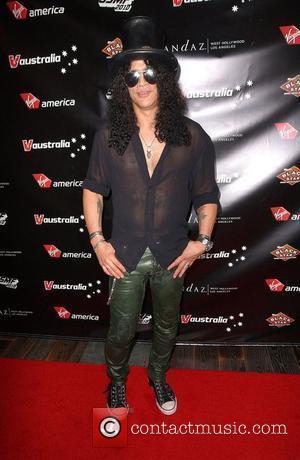 Slash and Duff Mckagan's supergroup Velvet Revolver is up and running again after the bass player quit JANE'S ADDICTION at the beginning of the month (Sep10) - they're auditioning two new singers in October (10).
The group has been without a frontman since Scott Weiland was fired in April 2008 and previous auditions fell flat after the Velvet Revolver founders failed to find a suitable replacement.
Slash, MCKagan and drummer Matt Sorum have since poured their efforts into other projects - but now Sorum has confirmed the band is back together and on the hunt for a new singer.
In a tweet to fans, the drummer writes, "Tryin 2 singers. Excited bout that."
Slash recently told ThePulseofRadio.com that he'll oversee the auditions after he finishes his current solo commitments - but touring singer Myles Kennedy won't be fronting the group.
He says, "We're nowhere until we can find somebody who can do that job. Very quietly I've had my ears to the pavement, trying to see if there's anybody that fits that bill, and it's got to be somebody really good, because I don't want to rush into it out of desperation. I want to wait 'til I get the right person.
"Kennedy is still committed to (his band) Alter Bridge. I don't want to be the guy responsible for breaking up a band. But we'll find someone. Maybe not somebody known, but some kind of local hero."
Kennedy was among the favourites to replace Weiland after the Stone Temple Pilots star was kicked out of the band, but he turned them down twice.