By Stephanie Chase in Lifestyle / Showbiz on 03 January 2016

The pair met while filming the musical comedy back in 2012.

Anna Camp and boyfriend Skylar Astin are starting off 2016 with some pretty big news, they’re engaged! Camp announced the good news on Instagram by posting a pic of her new rock, along with fiancé Astin.

In 2012, Pitch Perfect came out of nowhere to become one of the most-loved comedies in recent memory, and the good news is that this sequel matches it with both spiky humour and buoyant music. It would be impossible recreate the surprise of watching the original, but the cast and crew make up for that by kicking everything off with an outrageously rude prologue (complete with the biggest cameo imaginable), and the comedy that follows is relentlessly hilarious. 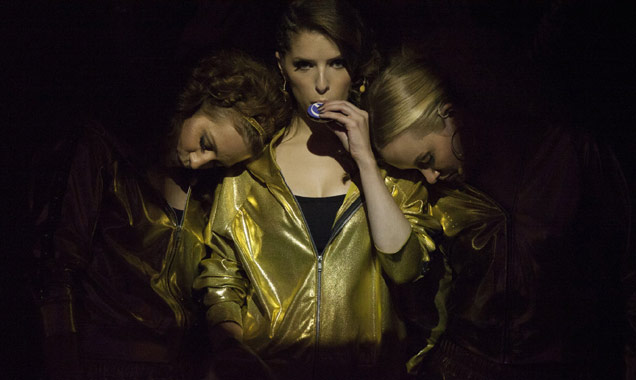 It's been three years, and the Bellas are now in their final year at university, having won three more a cappella National Championships along the way. Then they're disgraced by a wardrobe malfunction at a triumphant performance for the US President's birthday. Suspended by officials, their only chance to redeem themselves is to win the World Championships in Copenhagen. So Beca (Anna Kendrick) and her sidekicks Fat Amy (Rebel Wilson) and Chloe (Brittany Snow) rally the troops to prepare to take on the fearsome reigning champions Das Sound Machine. And there's a new Bella on the team as well: freshman Emily (Hailee Steinfeld), who is dabbling in songwriting.

Along with this central plot, Kay Cannon's script also weaves in a series of side-stories for each of the central cast members involving decisions about the future and romantic entanglements. All of these are a bit feeble, but they add layers of comedy, drama and even some meaning, although there isn't a single surprise along the way. Still, it's consistently amusing, as every line of dialogue has a witty joke in it, and the performances crackle with improvisational silliness that's genuinely infectious. Once again, the seriously gifted Kendrick is effortlessly charismatic as the natural leader of the gang, while the class-clown Wilson steals every scene with her random gags. Steinfeld offers a fresh blast of energy and talent in her role, although the perky Snow is somewhat sidelined this time.

You can call this Glee meets Mean Girls if you want to, but this riotously intelligent comedy is much better than that. With one of the funniest scripts of the year, the film keeps us laughing all the way through, never running out of witty gags even when the rather predictable plot kicks into gear. But then, we never really care where the story's going when getting there is this much fun. And honestly, we never want this movie to end. 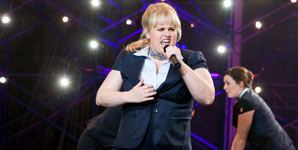 Anna Kendrick stars as Beca, a young woman who would rather mix mash-up tracks than attend a boring university. But here she is, so she decides to make a go of it by getting a job at the student radio station and joining the women's competitive a cappella group, the Bellas. But control-freak leader Aubrey (Camp) is annoyed to have the snarky Beca in her group, to say nothing of self-named Fat Amy (Wilson). Meanwhile, Beca's colleague at the radio station, Jesse (Astin), joins the champion male group the Troublemakers, led by the arrogant Bumper (DeVine). But as Beca and Jesse start to become friends, they risk running afoul of Aubrey's only rule: Bellas cannot date Troublemakers.

This rom-com plot isn't the focus of the film, nor is the impending a cappella championship, which we know from the start will be a showdown between the two groups. No, the focus is on the individual journeys of the characters, and even the smallest side characters are given space in which to grow on us. They're also brilliantly well-played by the entire cast, anchored by a solid, surprisingly layered turn from Kendrick. But the film's real scene-stealers are Banks and Higgins as competition commentators who reel off snappy jokes with such blinding speed that we can barely breathe whenever they're on screen.

Watch the trailer for Taking Woodstock

Woodstock Festival was almost not meant to be, originally the permit was pulled, only when Elliot Tiber stepped in and spoke to the organisers offering them the use of his parents motel and his next door neighbour, Max Yasgur, land that things got rolling. Taking Woodstock starts the moving story of Elliot Tiber and his personal struggle to keep the family motel open, what eventually develops from Elliot's plans is way beyond anyone's expectation.