Sixx:A.M. have released their updated version of 'Maybe It's Time' with Joe Elliott, Corey Taylor, and more, to raise awareness for the opioids crisis. 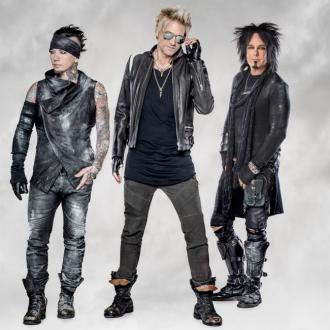 Sixx:A.M. have released their all-star rendition of 'Maybe It's Time' featuring the likes of Joe Elliott, Corey Taylor, and Slash.

Motley Crue rocker Nikki Sixx's band - which is completed by DJ Ashba and James Michael - re-recorded the track from their 2016 album 'Prayers for the Blessed' to raise awareness for the opioids crisis, with the royalties from the song set to be donated to the Global Recovery Initiatives Foundation (GRI) to support those in early recovery.

It was Nikki's idea to put out the charity single to help raise awareness and funds for the GRI.

The 61-year-old musician and former addict - who was pronounced dead after a heroin overdose in 1987, before being resuscitated - is a recovery spokesperson and advocate and he believes that ''united'' people can really ''make a difference and save lives''.

He said: ''I am proud to bring together these artists to help raise funds for the Global Recovery Initiatives Foundation. The opioid epidemic did not go away when the pandemic came along. Just the opposite ... those in early recovery became even more at risk than before so it's more important now than ever to raise awareness and support them. I really believe that united we can make a difference and save lives.''

The band's Artists For Recovery project has received the backing from the likes of Live Nation, Ticketmaster, iHeart, Pandora, SiriusXM, Entercom.

'Maybe It's Time' is also featured on the soundtrack for the upcoming Better Noise Films film, 'SNO BABIES', which ''depicts the grim realities of teenage addiction and its effects on a middle-class suburban town''.

Better Noise Films' share of profits from the film is also being donated to GRI.

It didn't take much for Def Leppard frontman Joe to agree to add his vocals to the track.

He said: ''So, Nikki rang me to see if I'd lend a vocal to 'Maybe It's Time'. After hearing the track for the first time in a while, I was reminded how good it is so I was in! It felt right, all around giving back to the much-needed Global Recovery Initiative.''

And Corey added: ''It's a real issue ... It's affecting young people more and more every year, so it's very, very important for all of us to pitch in and do our part, especially some of us who have lived through it ... those of us who have survived ... it's the least I can do.''

Sixx:A.M. These Are The Days Video