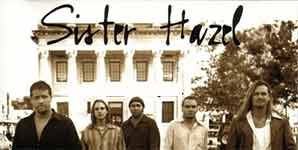 Check out this audio stream for Mandolin Moon, the first track to be heard off Sister Hazel's new album titled, Absolutely due for release on October 10th

Gainesville, FL fivesome Sister Hazel will be releasing their new album, "Absolutely," on October 10th. With national distribution via ADA, the album will be released on Adrenaline/Wandering Hazel Records. "Absolutely" contains 13 songs (see track listing below) of the roots rock Sister Hazel has come to be known for over the past thirteen years of their careers.

The album was recorded primarily at Darkhorse Studios in Franklin, TN, with additional recording completed at The Vibe Studio (Nashville), Thelma's Studio (Nashville), and Nickel and Dime Studios (Atlanta). The production responsibilities were split among three producers: Don McCollister, who has worked with Sister Hazel in the past (on their albums "Fortress," "Chasing Daylight," and "Live*LIVE"), Scott Parker (who also executive produced), and Richard Marx. McCollister and Parker each produced six tracks, while Marx produced the song he and Block co-wrote entitled "Meet Me In The Memory."

"Scott did a really great job of trying to extract what we do in our live show in the studio," says rhythm guitarist/vocalist Drew Copeland. "He got us back to the raw nature of where we go live on stage. And working with Don was very comfortable because we've known him for so long." Drummer Mark Trojanowski called working with Marx, "my favorite part of the whole experience. He's an amazingly talented individual."

The first single from the album, which features guest vocals from band pal Shawn Mullins, is called "Mandolin Moon." The song will impact at Hot A/C and Triple A radio formats on August 21st.