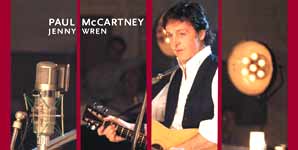 'Jenny Wren' is the second single to be taken from Paul McCartney's new highly acclaimed album 'Chaos And Creation In The Backyard'. Fast becoming a live favourite on Paul's 37-date sell-out 'US' tour of North America and Canada, 'Jenny Wren' is classic Paul McCartney. The press have described 'Jenny Wren' as, "his most poignant and affecting song in years" and "endearing and unexpectedly affecting."

'Jenny Wren' is both a soulful and mournful song with a simple and incredibly effective arrangement. It's difficult not to be moved by the heart tugging melody. It's an acoustic track in the style of much loved McCartney songs 'Mother Nature's Son', 'Calico Sky' and 'Blackbird'. McCartney in fact describes the track as "daughter of blackbird."

"I was in Los Angeles and I was in one of those moods. I wanted to go and play my guitar in the great outdoors. So I went into a spot in one of the canyons there, lovely nature spot, getting away from all the traffic and sat down and started playing. It's just that kind of genre that I love and I just had a lot of fun, wrote the basis of it there outdoors in the canyon, lovely day, went back home that night to where we were staying and sat around while dinner was getting made and made it up. But it's funny actually I was talking to someone about how much I love Dickens. And this person said 'Ah, Jenny Wren, our mutual friend,' which is this character in the Dickens book Our Mutual Friend. She is this really cool little girl who's sort of magical, who sees the good in things and I think subconsciously that reminded me that's where I got it from. But to me it was just something to do with Blackbird. A Wren is one of my favourite birds – a little English bird, the smallest English bird and I always feel very privileged to see a wren. So it's a combination of all of that."

In a rock n' roll first 'Jenny Wren' features a duduk solo. The duduk, an Armenian wind instrument, is one of the oldest wind instruments in the world.

'Chaos And Creation In The Backyard' was released in September to global critical acclaim. Upon its release it went straight into the Top 10 of the album charts in over 14 different countries across the world, including the UK and the US. It's Paul's 20th studio album since leaving The Beatles and was produced by Nigel Godrich. 'Chaos And Creation In The Backyard' is a return to the basics for McCartney. The album successfully fuses his undeniable song writing talents with his unparalleled musicianship. In fact, McCartney is credited with playing the majority of the instruments on the album, which is somewhat reminiscent of "McCartney" (1970) when he was credited with playing all of the instruments. They include the drums, guitar, bass, keyboards, as well as many of the less traditional instruments such as block flute, harmonium and flugelhorn.

Paul McCartney is currently on his fastest selling tour ever of the US. He plays 37 shows over three months. Winning rave reviews the shows have attracted high profile fans such as Tony Bennett, Steve Buscemi, Oasis and Lenny Kravitz. By the end of November Paul will have played to over half a million people across America.

'Chaos And Creation In The Backyard' is available in all record stores across the UK.

Pirates Of The Caribbean 5: Dead...

Pirates of the Caribbean 5: Dead...

Pirates of the Caribbean: Dead Men...