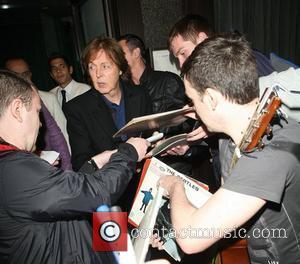 Sir Paul McCartney has poked fun at the curfew controversy which ended his encore showdown with Bruce Springsteen in London last weekend (14Jul12) by bringing rehearsals for the Olympics to an abrupt end.
The former Beatle has posted a new video on YouTube.com featuring the set up for the rehearsals at a secret location.
Appearing excited that his London Games opening ceremony spectacular is just a week away, MCCartney introduces a slice of what he and his band might play - counting in a rendition of I Saw Her Standing There.
The rocker gets through the first verse of the song when the power appears to stop the band in its tracks.
Looking mystified, MCCartney yells, "Who pulled the plug?"
The star's encore performance with Bruce Springsteen at Hyde Park last Saturday ended abruptly when concert organisers pulled the plug after the two stars sailed past the venue's strict end time.
Springsteen poked fun at the curfew calamity earlier this week when he took to the stage at Dublin's Rds Arena in Ireland on Tuesday (17Jul12) and switched a huge fake generator back to 'on', before launching into the final minute of Twist And Shout - the track he failed to finish in London with MCCartney.
He then held up a placard with the message "Only the Boss says when to pull the plug".