Sir Paul Mccartney Had A Crush On The Queen 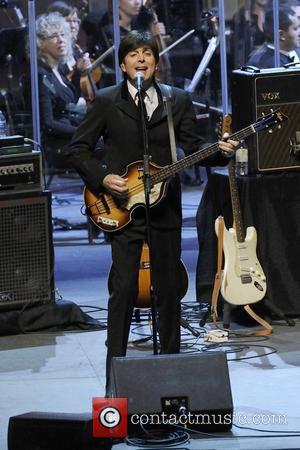 Picture: Tony Kishman, as Paul McCartney, performs on stage during the 'Classical Mystery Tour', a note-for-note live reincarnation of The Beatles at the Sony Centre...

Sir Paul McCartney is looking forward to performing for The Queen as part of her Diamond Jubilee celebrations because he thought the monarch was "a bit of a babe" in her youth.
The former Beatle has always been a big fan of Queen Elizabeth II and he has been invited to help mark her 60 years on the U.K. throne by performing at a concert in London in June (12).
MCCartney admits he is thrilled with the honour, as he had a crush on The Queen when she first ascended to the throne.
He tells Rolling Stone magazine, "You have to see it from the perspective of kids who grew up with her coming to the throne... Suddenly it was this Princess Elizabeth, who we always saw as a bit of a babe.
"We were the right age and we were quite impressed by her bust! Then when we met her, it was like, 'She's OK, she's cool'."