RiRi joined the former Beatles legend onstage to perform their 2015 collaboration 'FourFiveSeconds' at 'Oldchella' over the weekend.

Rihanna joined the Beatles legend Sir Paul McCartney onstage during his Desert Trip set in California over the weekend, singing on a surprise performance of their 2015 hit single ‘FourFiveSeconds’.

The Barbadian-born pop megastar took to the stage during McCartney’s headline slot on Saturday (October 15th) at the Desert Trip festival in Indio, California – a gathering that also included Bob Dylan, Neil Young, The Who and The Rolling Stones and has been dubbed ‘Oldchella’. 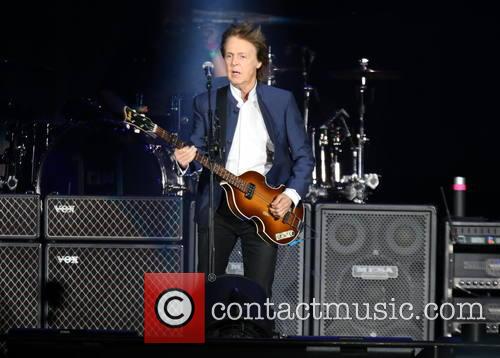 McCartney played the 'Oldchella' Desert Trip festival over the weekend

“We finally found someone under the age of 50,” McCartney quipped as she departed the stage, which marked the first time that the hit had been performed live since he, RiRi and the track’s other collaborator Kanye West all played it at the Grammy Awards in 2015.

Meanwhile, McCartney has also been in the headlines with the returning Phil Collins, who on Monday announced a European comeback tour in 2017, revealing that he has a long-standing grudge with the former Beatle, dating back to when they both performed at the Queen’s Golden Jubilee celebrations at Buckingham Palace in 2002.

Apparently, 74 year old McCartney's attitude was extremely condescending when Collins asked him for an autograph.

“McCartney was one of my heroes. But he has this thing when he’s talking to you, where he makes you feel... (like), ‘I know this must be hard for you, because I’m a Beatle. I’m Paul McCartney and it must be very hard for you to actually be holding a conversation with me’.”