Sir Paul McCartney was in the front row as he watched daughter Stella Mccartney's Paris Fashion Week show and said he thought the collection ''was beautiful. Very strong, very clean''. 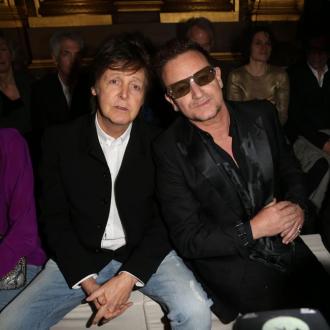 The designer was showcasing her autumn/winter 13 collection in the French capital this morning (04.03.13) which was once again witnessed by many famous faces, including her Beatles legend father, U2 frontman Bono, Jessica Alba and Nicole Richie.

But all eyes were on Stella's presentation and she didn't disappoint as she showcased contrasting pinstripes, voluminous coats and elongated skirts, which paid tribute to her British roots.

Stella said: ''These are the things I do, traditional and effortless, my Savile Row background, this was paying homage to those elements and Britain.

''It's about being honest to what we are, timeless classics but also inserting a femininity.''

After the show, Paul called his daughter ''the best'', with the 'Hey Jude' hitmaker adding: ''I thought it was beautiful. Very strong, very clean.''

The brand hopes to expand its store base in Asia.

Stella was one of the big names to show at PFW today, while John Galliano, Chole and Celine were the star attractions yesterday (03.03.13)