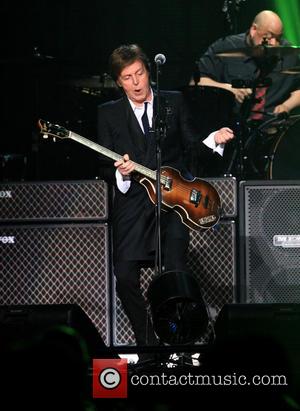 The re-release of Wings concert movie Rockshow has brought back fond memories for Sir Paul McCartney - because his late wife Linda plays such an important role onstage.

The remastered 1980 film, which features footage from four U.S. concerts in 1976, hit cinemas in the U.S. last month (May13) for a one-night-only screening prior to the Dvd and Blu-Ray release, but now there are plans to put the film on the big screen again, complete with an introduction from MCCartney.

Recalling the shows fondly, he says, "I think the big crucial thing really was by that point, Linda had learned how to play everything. As she was a complete novice when we came in and that was one of the big decisions. And people slagged me off for that: 'Ah, you shouldn't have this old lady in the band, you know'.

"I said, 'Look, you know, when we started with the Beatles, we didn't really know anything, we were just fresh out of Hamburg. We had a few songs under our belts and we had to learn that fame game.'

"So I liked that I idea that we would all learn it together. And by this time Linda had had enough experience to know how to play all the songs, to know how to sing all the harmonies. And by then, she'd developed this sort of great thing of being the cheerleader. She would get the crowd (going): 'Hey, come on!' She had a lot of spirit that way... (and) she became the emotional core of the band."