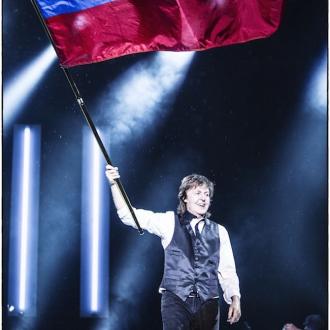 The Beatles legend impressed Alice Cooper, Joe Perry and Johnny Depp when he came to their Los Angeles recording studio, along with his regular drummer Abe Laboriel Jr., to record a version of 'Come and Get It', the track he wrote and produced for Badfinger.

Joe - who had met but never worked with Paul before - said: ''He knew all the chords, the lyrics, everything.

''He didn't have any cheat sheets. It was like he'd been playing it his whole life. Me and Alice and Johnny were standing there and looking at each other and I tell you -- if there's any ego-lever in a room, it's Paul.

''It doesn't matter who you are or what you've done. If Paul's in the room, he's there. It was hard to focus on playing.''

According to the Aerosmith star, Paul and Alice shared lead vocals on the track, which is a tribute to Badfinger members Pete Ham and Tom Evans, who both committed suicide.

And the 'Hey Jude' hitmaker won't be the only special guest on the group's album.

Joe told Rolling Stone magazine: ''The record is dedicated to all the friends we've lost to drugs and alcohol over the years and getting people to come in and cover the songs their friends wrote.''

Though the group currently only have a gig at Brazil's Rock in Rio festival in September in place, Joe says they are planning a tour and he is looking forward to getting on stage with the 'School's Out' singer and the 'Mortdecai' actor.

He said: ''Johnny's a great guitarist.

''The times I've spent with him, I've always been impressed. To go out and tour with him is going to be a lot of fun. Everybody's really charged about it.''