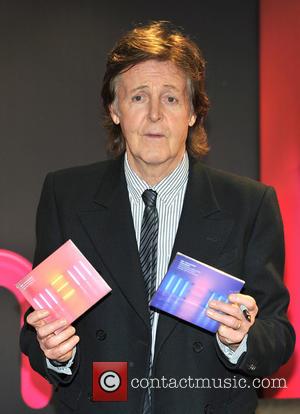 Internet fame may not exactly be hard to come by these days but it's hard to begrudge limelight to the snap-happy antics of a few rather cheeky Nebraskan teens who made the most of celebrities being in town.

Tom White, Luke Koester and Jacob Murray wasted no time in cementing the moment when they spotted Sir Paul McCartney and Warren Buffett chilling on a bench in Dundee. The musician and the Omaha-based billionaire, who dined together during their evening in Dundee, appear to notice the photo being taken but do not object to the cheery fans.

Murray shared the image on Twitter on Saturday night, writing "Best picture of the night with @WarrenBuffett and @Paul McCartney goes to Tom White!" Meanwhile Koester later uploaded a photograph of McCartney walking down the street. "Just saw Paul McCartney in Dundee! My night is awesome!!!!!" he wrote before lamenting "Too bad he couldn't sign my Abby Road vinyl :/"

There were plenty of photos of the pair, whose presence caused a stir in the Nebraska town, but none have proved to be so widely shared as White's stealthy, thumbs-up pose with the men resting their feet by sitting on the bench.

The teens will have been delighted to discover that the 72 year-old rocker picked up on the publicity surrounding the shot and decided to retweet it to give it an extra boost. "Just hanging out with friends," he casually captioned the retweet.

Murray's mother Deborah told The Daily Mail that Jacob and White photographed one another standing in front of the former Beatle and his dinner companion. "Paul was very kind and wonderful to the kids," she revealed.

More: Paul McCartney - just one of many celebs who loves a good proposal.

The best photo taken of @PaulMcCartney and @WarrenBuffett By me !!!! In Dundee!!! pic.twitter.com/bJC1zmqahE