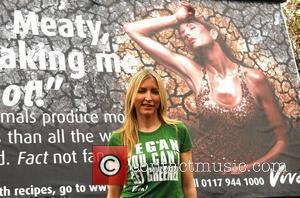 The charity campaigner, 36, spoke to the Road To Perdition actor as she stood in for Larry King on American show LARRY KING LIVE.

Mills McCartney took the OSCAR winner by surprise when she opened the interview with the question, "How come you're such a philanthropist?"

A startled Newman replied, "Come on. Well you start quickly, don't you?"

During the interview, Mills McCartney flitted between starstruck fan and political activist, and probed Newman on subjects he didn't want to discuss on live television.

She unsuccessfully tried to talk to Newman about his son's death from drink and drugs, his relationship with his wife JOANNE, and his view on the Iraq war.

According to British newspaper the DAILY MAIL, critics have been describing Mills McCartney's interview attempt as "simply awful".