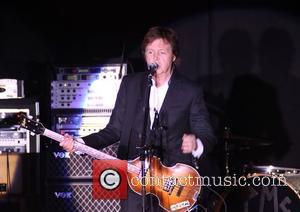 Sir Paul McCartney treated fans at his homecoming show in Liverpool, England to free food and drink after they braved freezing temperatures to attend the gig.
The Beatles legend played the O2 Academy in the city on Monday (20Dec10) and many loyal devotees stepped out in the snow and ice to see their idol.
He thrilled the audience by singing hits from throughout his lengthy career - and even after the show had finished he still had his fans in mind.
MCCartney paid for free fries, as well as tea and coffee, to be handed out to the crowd as they left the venue, according to the Liverpool Echo newspaper.