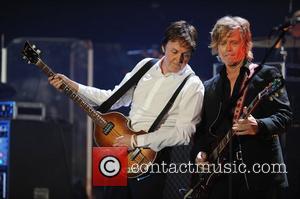 Tourism bosses in Britain are in talks with Sir Paul McCartney over the former beatle's plans to rename the London Eye landmark as part of a publicity campaign surrounding his upcoming DVD anthology. Marketing bosses behind the DVD launch have reportedly approached the London Eye bosses with a view to rechristening the big wheel attraction on the banks of the River Thames the MCCartney Eye. They also hope to beam the artwork for the cover of the DVD, which features the rocker's eye, onto the landmark in November (07) for the duration of the launch events. A source tells Britain's The Mirror newspaper, "It's ambitious but his people are determined to make it happen and Sir Paul may even perform a one-off show in one of the pods to make it even more special."