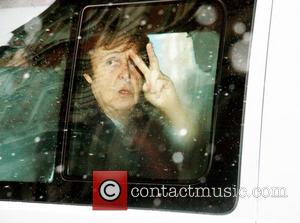 Picture: Paul McCartney arrives at London's 100 Club to play a benefit gig in aid of the failing venue MCCARTNEY BACKS CALLS TO SAVE HISTORIC...

Sir Paul McCartney fans crammed into London's historic 100 Club on Friday (17Dec10) to watch the rock legend perform his smallest concert in more than a decade.
The Beatles icon took to the stage before 300 devotees for a lunchtime set at the tiny underground venue as part of a campaign to save the concert hall from closure due to a lack of funds.
He delighted the audience with renditions of classics including All My Loving and Magical Mystery Tour, before rallying support among the crowd by shouting, "Who wants to save the 100 Club?" He then played an a cappella version of Hey Jude.
Tickets for the show, priced at $90 (£60), sold out instantly when they went on sale on Tuesday (14Dec10).
Owners of the 100 Club admitted soaring rent costs in central London have placed the famed venue under threat.