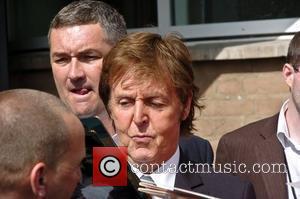 Picture: Sir Paul McCartney is mobbed by fans after attending the graduation ceremony at the Liverpool Institute of Performing Arts which he founded Liverpool, England -...

Sir Paul McCartney turned spin doctor for pal Woody Harrelson when the actor hit the headlines for attacking paparazzi in New York in April (09) - the Beatles star was the one who suggested the actor told reporters he thought the snapper was a zombie.
The movie star was reported to police after flying into a rage at La Guardia airport when a paparazzi cameraman refused to leave him and his daughter alone.
Harrelson was caught on camera attacking the unnamed man and smashing his equipment.
Shortly after the incident, the actor released a statement, in which he explained he was confused after spending days shooting new film Zombieland - and thought the cameraman was a member of the undead: "I flew to New York, still very much in character... I was startled by a paparazzo, who I quite understandably mistook for a zombie."
Harrelson now explains the ruse was dreamed up by MCCartney.
He tells Playboy magazine, "That was Paul's idea... I was feeling awful about it (attack), and I ran into Sir Paul MCCartney. We've been friends for a long time through our shared passion for veganism and many other issues. He's got such a great capacity for happiness.
"I told him what happened and also that I'd just finished this movie called Zombieland, and Paul said, 'That's it, man. Just tell the press you thought the cameraman was a zombie.' So that's what we went with."