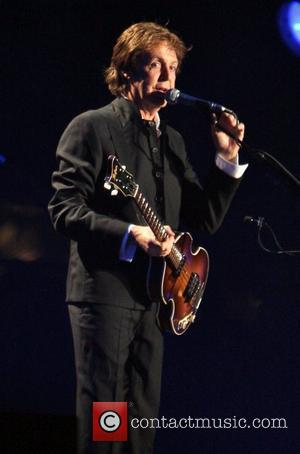 Sir Paul McCartney has penned an open letter to Pamela Anderson, asking the Baywatch star to help promote vegetarianism.
The Beatles legend, who is a staunch animal-rights activist, has appealed to the actress to lend her name to the cause, after the pair both became involved in a campaign to help the plight of seals.
Anderson wrote a personal plea to Russian leader Vladimir Putin to ask the politician to help her ban the slaughter of baby seals in her native Canada, while MCCartney called on the European Parliament to implement a ban on the sale of all seal products
And the veteran singer is determined to get Anderson's support in his bid to turn more people to vegetarianism.
He's penned a two-page letter detailing how bad meat-eating is for the environment - and is hoping vegetarian Anderson will help him promote the cause.
MCCartney writes, "Dear Pamela. We are sending this letter because both of us share a concern for our planet's welfare and hope you will find the following information of interest. The Fourth Assessment Report of the Intergovernmental Panel on Climate Change (IPCC) stated that 'changes in lifestyle and behaviour patterns can contribute to climate change mitigation across all sectors.'
"A significant reduction in emissions can be brought about through changes in diet. The single most effective act is to become vegetarian or reduce meat consumptoin.
"Unfortunately, with higher incomes, societies are turning to greater consumption of animal protein, which reduces the availability of food grains for direct consumption by impoverished human beings.
"We are, therefore, writing this letter not because vegetarianism is a fad or an emotional issue but because it is a very attractive option for reducing emissions of greenhouse gases and stabilising the earth's climate and ensuring food security."