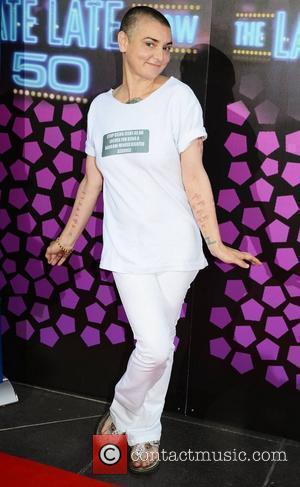 Three bandmates were arrested following an anti-Putin protest in Moscow earlier this year (12), and last month (Aug12) they were sentenced to serve two years behind bars for hooliganism motivated by religious hatred.

Insisting her correspondence comes from "my genuine unconditional and non-judgmental love of all people, especially strangers," she urges Putin to release the women, so their children can have their mothers at home while they fight an appeal.

O'Connor writes, "Some people have asked I write a song on top of a backing track of the female band currently in jail in Russia (but) I find I'm someone who doesn't like to get involved with politics. I tell my children truthfully: I am a singer because I am not intelligent on anything else. And politics confuses and bores me.

"The song is aggressive, very critical of you, and, as I don't get involved in politics (even in my own country) and know nothing about you apart from your childhood, I do not want to hurt your heart by approaching you with anything but love... So instead of recording the song I thought of writing a gentler one, but there's too much to say and make it rhyme in 3 minutes. So I'm writing this open letter to you, from a mother, to a mother's son and a father.

"Your mother suffered the loss of two children. That must still be a great grief in your family's and your own heart. Sometimes for men, the only way to live with loss and grief is to bury it. And when something brings it up we can run in all manner of ways. The more sensitive we are, the more hardened we make our hearts. One can't be a poppy in a tsunami. One must become a football.

"Baby darling, please forgive me addressing you in such fashion, but I see all people as sons and daughters of mothers... and in my middle age, I feel like I want to mother people. So I address affectionately where my human weakness doesn't mess it up.

"Two small children... Gara and Philya... are now carrying the loss of their mother... These children... they don't care about politics, or the band above mentioned, Sir, or hurting anyone. They love their mummies. And you need them to grow up loving their country. And they are going to suffer intolerable agony for the rest of their lives if they can't have their mummies back as soon as possible.

"One poor child only saw her mama for the first time in six months yesterday. Oh Sir, can you imagine as a young father, how awful it would have been for you and your child if a brash impulsive young action on your part, not well thought out and not meant to frighten anyone, resulted in your poor child losing you?"

O'Connor goes on to suggest Putin frees the imprisoned rockers while their appeal and "the issues concerned are being considered," adding, "Sir, please could you find it in your heart to allow the mothers of the band be allowed home on house arrest immediately so the poor innocent little children needn't suffer, Sir, and carry loss such as your mothers or yours which may ruin their innocent lives."