British actor Simon Pegg has revealed he recently played a trick on this twitter followers and pretended he had been abducted by aliens. 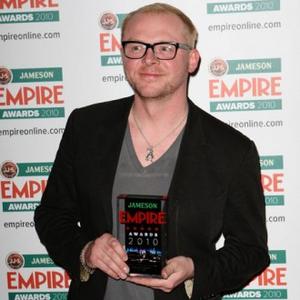 Simon Pegg is a paranormal prankster.

The 'Shaun Of The Dead' star revealed he recently confused a whole host of his twitter followers by pretending he had been abducted by aliens that were living in his loft.

He explained: "I tweeted one morning that my attic was open and I didn't know why. I did know why, it was a faulty catch. Everyone was going, 'Oh, that's really creepy'. So then I started to lie. I tweeted that my dog was sitting underneath it barking.

"Then I said, 'I'm going to go up there and check it out. I'll be back in five minutes.' And I didn't come back for two days.

"The only thing I tweeted after disappearing was this phrase in Ancient Greek, 'They're my children now and you will never see them again'."

However, the British actor has experienced some equally bizarre goings on in real life, including being "beaten up" by 'King Kong' star Andy Serkis and legendary Hollywood director Steven Spielberg while filming new movie 'The Adventures of Tintin: Secret of the Unicorn'.

He explained to ShortList magazine: "Me and Andy Serkis were doing a scene where Captain Haddock is shaking me. Steven goes, 'No, no, no, try to do it like this'. So Steven got on top of me and he started shaking me. I was just lying on the floor being beaten up by King Kong and Steven Spielberg!"